Getting Back on the Bike

Getting Back on the Bike 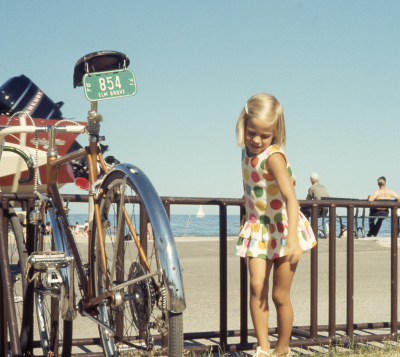 When I was five, Dad ran down the driveway holding onto my wobbling bike. He let go, shouting words of encouragement even as I crashed onto the pavement. My elbow and knee were bleeding, but what hurt worse was my pride. “I can’t ride a bike without training wheels,” I cried through tears. After only two unsuccessful attempts, I concluded that I did not have biking skills. I stormed inside to do something else I already could do well.

Forty years later, I still have that stubborn desire to excel at everything and that crushing disappointment if I cannot immediately master a task. A strong drive for excellence, I imagine, is what landed many of us at Duke University. But the need for instant proficiency and worries about failure can prevent us from developing skills that only emerge over time and with practice.

I teach a course called the “Causes of Crime.” Students read classical and contemporary texts from 18th century European theorists through the more diverse range of criminologists today. Students often see this material as an alien realm of obscure terminology, irrelevant to the real-world. They drill themselves to remember abstract concepts, names, and opaque jargon just long enough to do well on a quiz or exam. By the end of the semester, they forget much of what they had memorized. Their research papers requiring them to compare, contrast, and evaluate crime theories lacked creativity and insight and have been a beast to grade. I needed to “try one new thing,” as the Bacca Fellowship encouraged.

We are all embedded in a world of crime, bombarded by cell phone alerts, Netflix documentaries, news reports, mugshots, and movies. Students are fascinated by famous criminals and enjoy reading about them in popular media. LAMP supports faculty in their efforts to teach students how to create and communicate across such diverse media. So, I assigned teams of students to create 20 minute infotainment documentaries. The goal was to help theoretical explanations stick in their minds, to be pulled out later as a way to make sense of criminal behaviors around them.

Just like that kindergartener climbing on her bike with no training wheels, I was full of doubt whether I could pull off a semester teaching students content with the critical use of media that I did not know how to create. My main obstacle, as I saw it at the beginning of the year, was that I have no experience creating or evaluating videos. How can I expect my students to make engaging, professional-quality films using theories to explain complex behaviors when I can barely use my iPhone to record my daughter’s concert? Who am I to judge and grade student-produced videos when I have never taken a film class?

My dad was not there to call out, “You can do it,” but LAMP colleagues offered their support. They gave me permission NOT to be a film expert. That really was not even the point of the assignment. Instead, I focused on the goal articulated in my learning objectives: students should explain, evaluate, and apply criminological theories to contemporary events. The infotainment video was simply the vehicle through which students could demonstrate their comprehension and critical analysis.

LAMP colleagues encouraged me to be the link between students and media experts. I created a Sakai webpage that provided numerous resources on equipment, technique, lighting, sound, and editing, as well as film analysis and critical media theory. Drawing on the works of film scholars, I adapted and shared with students a rubric that emphasized content, with only general parameters for film quality.

During class, I gave students time to work in teams to select their famous criminal, discuss facts they had individually gathered about the case, and decide which theories were most applicable and how. As I moved through the room, their excitement was palpable, like being backstage before a big performance. They prepared the video content while engaging in many of the higher-level learning skills that we want to see in our classrooms: discovery, synthesis, critique.

It turned out that making the film was the easy part for students. Growing up in a digital media environment meant most students already knew how to record and edit video. Tech Tutors in Duke’s Multimedia Project Studio and the Link provided additional expertise.

On the last day of class, we had a film screening party, complete with popcorn and an audience choice award. I was blown away by the content and quality of their videos! Their sophistication in intertwining theoretical concepts with personal narratives was much deeper than I had observed in research papers. Regardless of my limited knowledge of media studies, I could assess whether or not students had achieved the objectives laid out in the rubric.

After those early failed attempts to ride my bike, it took me a year to try again. By the end of first grade, I could pedal all afternoon without falling off. Trying new things in the classroom can also be intimidating.  But with support, unfamiliar assignments using new media can foster student learning, retention, and application.

ABOUT THE AUTHOR: Jenifer Hamil-Luker is an assistant professor of sociology at Duke University. Her research focuses on how early life experiences shape people’s pathways through adulthood and the role this places in perpetuating socioeconomic inequalities. She has published and presented findings on health, education, and criminal justice processes.