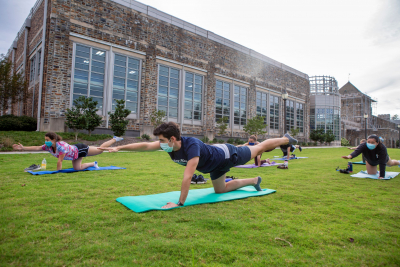 Before starting their own individual research on online communities and tribes, I asked my students to work together in groups of 3-4 and to research an online bobo community in order to pinpoint what characterizes community as such:  What does community feel like? What keeps it working?  What happens when it’s not working? When does being part of something online become a mere performance, a way, in other words, to monetize by using “community” as a platform.

My objective in teaching the seminar “Hashtags Memes and Digital Tribes” was to investigate the characteristics of community and collective life in the digital age.  Because it was the Spring of 2022 – that is 2 years into lockdown and isolation—I wanted to model community in the classroom, before my students submerged themselves in researching community and community life.

The key denizens of our seminar and the communities the members of our seminar were to research are instantaneously recognizable as David Brooks’ “bobos.” They embody all the features that is the stuff of our culture, online and off. Brooks’s Bourgeois- Bohemians (or “bobos”) are the enlightened elite of the information age. They live a lucratively busy life that is distinguished by a seeming synthesis of comfort and conscience, corporate success, and creative rebellion.

The bobos, as Brooks observes, are a fusion, of 1960s counterculture and 1980s entrepreneurial materialism. Before the pandemic, that is before everyone was working remotely, the bobos were epitomized by #vanlife, a community of former Wallstreet businessmen and women who lived in glammed up and wired VW vans and worked from campsites all over the West coast while catching the sunrise over glistening ocean views.

When I introduced Brooks’ book Bobos in Paradise: The new upper class and how they got there to my class as a model of the type of cultural research they were assigned to do around contemporary online communities, my students immediately recognized themselves in this culture. The bobos expensive bohemian wear, their beautiful fair-trade bamboo matcha whisks and its black marble keepers, the $50 dollar environmentally-friendly metal water bottle filled hourly at the filtered water fountain and their refined locally brewed kombucha.

My students were obsessed over the same things the bobos obsess over.  They wore it, carried it, and luxuriated with it in their rooms before and after class.  It was an easy conversation for us to have as an introduction to the subjects of our class. They could speak to bobo demographics and the bobo identity, to bobo beliefs and the hypocrisy and contradictions that the bobo lived. They knew all the bobo prized social platforms, their jargon, their habits, their signature presence and their conscientious exuberance.

What was less clear to them was what characterizes belonging, by which I mean “community belonging”.  They had after all spent almost 2 years isolated at home or in their campus dorm rooms.  Many of the online communities they chose to focus their individual projects on were either centered around celebrities such as Taylor Swift, Miley Cyrus or K-pop groups like LOONA and BTS. They also shared a surprising interest in the newly emerging DAOs (Decentralized Autonomous Organizations) that were in one way or another passionate about their recently purchased NFT (Non-Fungible Token) -- artworks made to fit a profile picture square on an online platform worth 40,000 US dollars.  When I asked them to research an online community, in other words, all they knew about “community” at this point were “stars and their satellites” or “me” collectives.

So, before starting their own individual research on online communities and tribes, I asked my students to work together in groups of 3-4 and to research an online bobo community in order to pinpoint what characterizes community as such:  What does community feel like? What keeps it working?  What happens when it’s not working? When does being part of something online become a mere performance, a way, in other words, to monetize by using “community” as a platform.

One of the student groups studied the Instagram Yogis: married, 30-50 year old women, who are essentially educated homeowners, and who spend at least $90 a month on yoga classes. Between 2012-2014, these yogis flocked to Instagram to start using the platform as a tool for tracking their progress and for keeping a log of their poses. With 36 million people practicing yoga in the US, they soon realized that they could make money on the platform... And so, they stayed.

My students reported that the Instagram Yogi community was fairly inclusive. They practiced yoga together, posted pictures, and engaged with other yogis in the community. The usual stuff of online communities. The students’ investigation of the Instagram Yogis also showed that some community members went on to create yoga-specific accounts.  And there they encountered financial barriers to community life:  the cost of clothes and mats, the heavy cost of yoga retreats, the lack of free time and the cost of a professional onsite photographers to capture their marvelous poses.

My students’ group research projects on the bobos (which included “glamping” and “digital nomadism”) lasted one brief class session, with an additional day to prepare a presentation to share with the rest of the class.  I can’t say that their projects shed enormous light on the practices that make a community a community (collective passions, community spaces, rituals, habits, a common language and jargon), but my students did come to learn some important lessons about themselves as members of a community. They also learned something about the benefits of working together as a collective.

In our discussion following their presentations, some students said that what they discovered were new skill sets: the ability to edit film, for example, for a brief film reel made for their presentation. Others agreed that the shared burden of the presentation made working together in groups fun, but, importantly, easy. They found their own voice in community and discovered new uncharted niches on the internet together. They learned to delegate and divide up the tasks into smaller, more manageable, buildable parts. They played on one another’s strengths. They learned that they could learn new things from each other: they introduced each other to new online platforms and surprised each other with the quirky online communities they discovered together. They could trust each other to come through with their part of the research as they went into presentation mode.

A lot of this is what I learned as a LAMP fellow as well (inviting students to join me as advisors and temporary TAs, for example. This taught them a lot about the process of building community and how to support it). More importantly, I learned that working together brings with it epiphanies in the small things and that it’s in doing the ordinary, small things that we build the strengths of a community. Working on a project in the context of community helped me work out the kinks of my project and gave me the tools I needed to support my students as they reemerged as the collective.

ABOUT THE AUTHOR: Negar Mottahedeh is a cultural critic and theorist specializing in interdisciplinary and feminist contributions to the fields of Middle Eastern Studies and Film and Media Studies.