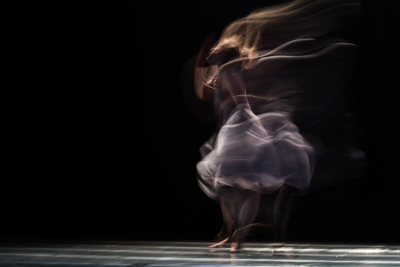 At the request of the Music, Dance, and Theater Studies departments, I designed the course “Writing about Performance,” which I taught this past semester for the third time. At each iteration, I’ve expected it to attract mostly students majoring in the arts, but in fact, they’ve come from a wide range of social sciences, humanities, and STEM disciplines. What the majority have in common, though, is a familiarity with the stage. Some are dancers; others are composers or choreographers; many have played a musical instrument since childhood.

The course is ambitious in its learning goals. As an anthropologist and ethnographer, I want to offer students a perspective on performance that reaches beyond the stage – a new lens for observing and understanding the different roles they play in their daily lives. So, in the first unit, we explore theoretical contributions from the social sciences to the field of performance studies, and students then use these concepts to describe, ethnographically, a social interaction of their choosing. They’ve written about everything from the theatrics of networking for internships and participating in seminar discussion, to ordering coffee from a barista and setting up for yoga class.

Midway through the semester, the focus then shifts to writing about staged performances. This involves first understanding the critical performance review as a literary genre and identifying its key elements and stylistic variations. Each student is asked to attend at least five live performances during the semester and to practice taking notes and writing critical reviews. Thanks to a fruitful collaboration with Duke Performances, they have also interacted with resident artists who visit our class. For Ethan Iverson, jazz pianist and music critic, students had questions about improvisation as performance and about his goals as a critic and reviewer. From Samir Langus and his New York-based Gnawa music ensemble, students wanted their thoughts on cultural appropriation and how their North American audience made sense of the trance element in traditional Gnawa rituals. From choreographer Pam Tanowitz and pianist Simone Dinnerstein, co-creators of New Work for Goldberg Variations, students wanted to know about their collaboration process, but also about their thoughts on performance reviews. Did they even read these? Why or why not? What made a review useful to them as performers?

Of the courses’ many learning goals, two are specifically geared toward expanding students’ descriptive vocabulary. These are: 1) to capture, in writing, ephemeral elements of dance, theater, and musical performances; and 2) to identify multiple ways in which a performance communicates a message. With these goals in mind, we do a series of in-class writing exercises, each prioritizing the use of different senses in composing descriptions. For example, students are asked to describe a dance without mentioning movement, or to describe a musical piece without reference to sound.

Other exercises are meant to expand our non-written communication skills. After pondering the usefulness of different media to communicate with distinct audiences, students write a research project on a performer or performance genre of their choosing, and then are asked to “perform” their research findings. That is, to translate their research into a non-written format that best suits their object of inquiry, their intended message, and their target audience.

Combined, the different assignments provide practice in both noticing the subtler ways meanings are conveyed and in finding more nuanced ways to express meaning, with or without words. The hope is that, being temporarily deprived of words will lead to more incisive, less predictable writing in the end.

Creativity abounds. In past semesters, one student rapped on his favorite Christian rapper, and on why his persona fits neither the social conceptions of a “Christian” nor those of a “rapper.” Another student choreographed (and performed with a partner!) a swing dance that narrated, through movement, the evolution of swing from a social dance to a competitive performance. Yet another student recorded a podcast on the booming phenomenon of podcasts and the factors contributing to the genre’s success. The class enjoyed a live performance of a student’s original jazz composition, video collages highlighting the structure of commencement speeches and of World Wrestling Entertainment matches, and a multimedia presentation on modern-day courtship rituals through texting and social media. One student recruited his friends as actors and directed a video tutorial on South Korean drinking etiquette, demonstrating the intricate choreography of gestures performed among drinkers of different social status.

In 2019, I applied for the BACCA Fellowship to fine-tune this last assignment with the input of my colleagues. I wanted to maintain the openness of the prompt and the room for creativity, while adding some scaffolding to the process. To that end, this semester I asked students to submit a reflection after each performance attended, noting a) the main idea/feeling/message of the performance, and b) how it was communicated to the audience aside from the use of words. In addition, I built into our schedule several workshops designed for students to brainstorm, peer-review, and rehearse their final performances.

On the first day of this past term, while students still had a chance to drop the class, I made a foreshadowing announcement: “If you’re the kind of person who needs to have a detailed plan for the semester, this course isn’t for you.” “We’ll all need to be flexible,” I told them, cognizant that we’d have to adapt our schedule to the offerings of local venues and to the availability of our resident artists. But, in January of 2020, no one could have predicted that a global pandemic would radically alter social interactions and bring live performances to a halt.

As we moved our class to an online platform, we had to stretch our definition of “live performance.” Students were given the option to create a group performance and brainstormed possible projects in their online breakout rooms. While a few chose to record themselves dancing or singing solo in their pre-college bedrooms or backyards, others embraced the global zeitgeist and co-created a comedy sketch on the joys and woes of learning via Zoom.

I’m slated to teach this course again in Spring 2021. If, at that time, we still need to interact remotely or attend virtual performances, I will have this year’s experience to draw from. I’d preserve the same assignment sequence, but would explore alternative technologies and platforms for students’ final projects. Either way, I plan to maintain the option of collaborative student performances.; this was an unplanned but welcome addition to the course. With any luck, we’ll all attend live performances and work together face to face.

ABOUT THE AUTHOR: Marcia Rego holds a Ph.D. in cultural anthropology from the University of California, San Diego, and teaches anthropology-themed, writing-intensive courses at Duke University, where she is Director for Faculty Development and Assessment for the Thompson Writing Program.