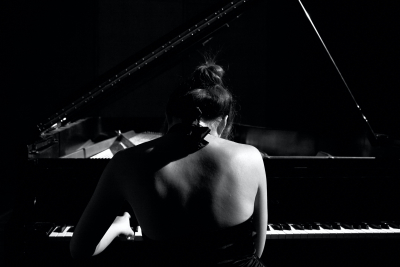 A confession; I am a performer not a writer. I am a musician to be exact, or more exactly, a trombone player. And as such, I enjoy developing ideas and expressing with others. Not that I’m the most talkative person in the room, it’s just that interacting or performing for people seems to put me in a state of mind more conducive to idea development.

However, like most of us, my job requires that I write a lot. This has been particularly true in the past six months. Normally, this would have been a huge chore, but I have recently had an epiphany. The obstacles I have faced in my writing are the same as those my students face in my classes–fear and a lack of a process.

A bit of background, I teach applied music classes (lessons) at Duke and what makes these classes unique is that we rarely meet as a group. Instead, I meet weekly with each student, one at a time. A luxurious kind of teaching, I know, but the applied study of music has always been centered on mentoring and modeling, master and apprentice. It’s an old method that is set in its ways. This is not to say it doesn’t work, it is an incredibly successful method. Every musician, artist, or scholar will tell you about a period of learning, much as I have just described, that inspired them to become the person they are. Yet, I still feel something is missing. A considerable amount of class time is spent discussing things like the right way, imitating a master musician, or using the latest app to invigorate instruction. These are all useful things, but still only accomplish a small part of what I want my students to learn.

So, a little over 12 months ago, I applied for the BACCA fellowship to reorganize my teaching to help students with two essential skills; creativity and adaptability. I was fortunate and honored to receive the fellowship and through the inspiring discussions held with my BACCA colleagues early in the Fall, I formulated a plan. I decided that technique was not the main issue. My students are quite advanced in the basic knowledge necessary for music-making. Rather, the primary problems students face are low confidence, unused imagination, and an inability to synthesize all learning towards the creative process. Due to their varied work styles, unrealistic expectations brought about by the digitally manipulated world, false perceptions of personal skill, and social power dynamics, students are trapped in the fear of doing something wrong or being perceived as weak. These problems paralyze technique and hinder creativity.

I decided to stop talking about how to play. Being a creative musician is about embracing the unknown rather than trying to exert control over every detail. Music is a lived experience that combines ideas from personal technique, the musical score (if one exists), and experiences in the moment. To innovate, I needed to abandon standard pedagogies, or at the very least adapt them. To this end, I decided to pursue projects involving simple improvisation, lyrics/narrative, and the outdoors.

First, using 8-bit video games such as Atari Asteroids! or Combat as visual inspiration, I had students create an improvised musical score to one of these games. Why improvisation? Because in the most basic sense, improvisation is simply a combination of prior knowledge with what one has at hand resulting in the creation of something new and unique. To make the project work, I decided that in addition to weekly one on one meetings, group work would be necessary.

For three weeks, the class met collectively for an extra hour working in pairs to practice and plan the improvised compositions. To keep things simple and non-threatening, I requested that students limit their improvised musical language to no more than five notes. Once the duets were added to real-time gameplay for the performance, the students would need this simplicity to manage the spontaneous nature of video games.

Though the performances suffered from an occasional incorrect pitch and were somewhat limited by the lack of skill from the game players, the project outcome was very positive. The improvised music generally took the form of simple scaler motives combined with a sustained bass note, but the rhythmic ideas were quite complex. The most exciting outcome of the project was that the students listened close and adapted to the unscripted gameplay. Also, there were several moments in which the music paused as the improvisers contemplated their next move. Typically, for both scripted or unscripted presentations, students shy away from impromptu changes or pausing for fear that it signals a lack of knowledge or preparation. However, in this project, students were able to bypass these fears by taking the time to think and more importantly, listen.

The improvisation project was followed by an exercise in composing lyrics or a narrative for an existing piece of standard repertoire. We used simple melodies from a variety of genres such as symphonies, pop instrumentals, instrumental world music, and jazz. Like the improvised project, I had the students internalize the music (play from memory) and once again they performed more authentically and exact. A side benefit was that the lyrics gave the students something tangible to base their musical effects upon. Metaphorically, they weren’t thinking about walking anymore, they just looked at where they wanted to go and then moved.

For the final project, before the pandemic shut down, I planned to do something with performance and being in nature. There is plenty of scientific and anecdotal evidence that shows the calming and clarifying effects of being outside in nature. Let’s face it, the world is it is a distracting place with many things competing for our attention at the same time. This final project would have involved a comparison of video recordings of performances made before and after an unplugged walk in nature. The basic idea was to meet for a lesson at Duke Gardens or Duke Forest, record a short excerpt of music, take the unplugged walk, and then re-record the same music upon our return. Needless to say, that project is on hold for now, but my suspicions say it would have been equally effective at solving the creative dilemma.

So, what have I learned from all these projects? To my surprise, nothing specifically about music instruction. I am sure that reflection will give me a few other outcomes, but I have come to realize something about myself–I am not the performer I claimed to be at the beginning of this post. A performer simply gives you a set of information along with their opinions. Instead, I am a teacher. And, like all teachers, I work in a content area, but my real work is found in process. When I favor process over content specifics, my students are more confident, clear, and expressive. Perhaps more importantly, they take the processes with them out the door and can use them to synthesize all their learning.

Sure, I’ll admit this is all anecdotal and one-sided. But there is no denying the improvements made using this pedagogical approach. It’s certainly not a way of teaching that is good for everyone as it requires a bit of improvisation. But isn’t everything in life an improvisation? The course you’ve moved online, a conversation you had earlier today, and even the writing of this blog post–in a sense, it’s all improvised.

ABOUT THE AUTHOR: Michael Kris is a Teaching Associate Professor at UNC and is also part of the teaching faculty at Duke University and the prestigious Eastern Music Festival.